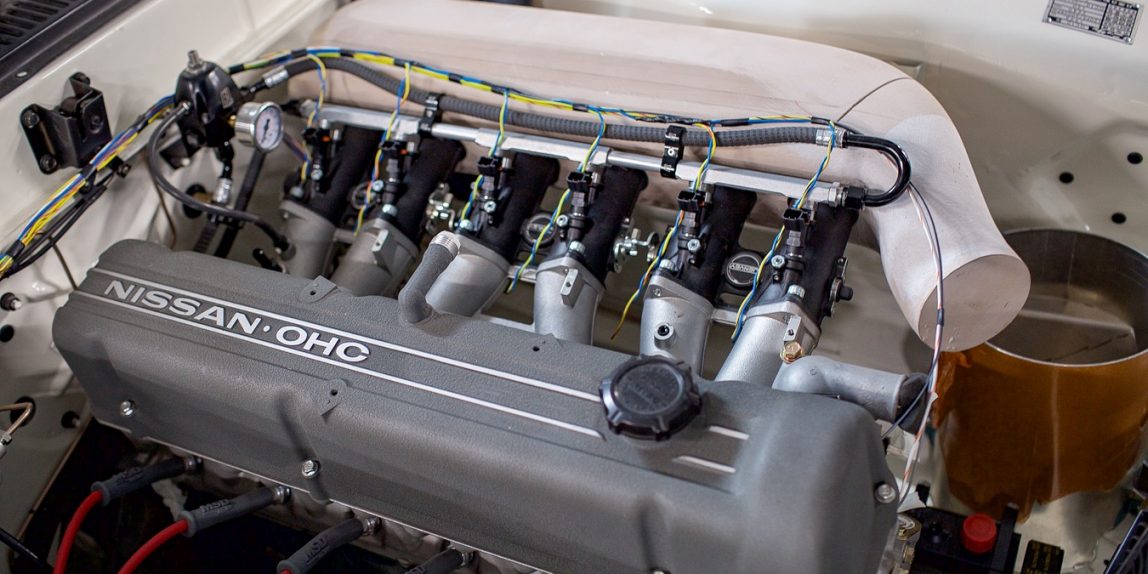 I seem to have let 4 months slip by, on the Nissan Skyline hakosuka project, without posting anything at all. I think I have fallen into the trap of just putting snippets on my instagram. ….to be honest I have no idea if anyone really reads this.

The other thing that seems to hold me back from posting is that there are lots of things underway but not finished. I think I need to get out of the mind set of worrying about if things are finished or not….just update as I do things.

Last time I posted about this project I had just received all of the fuel lines and associated kit from RacingLines.

I chose to use their SUPALITE range of hoses which feature a fully crimped, factory style, fitting. They are RacingLines top level hoses featuring collapse resistant PTFE hose and a black, fire resistant, woven outer. Coming in at over 50% lighter than the stainless braided hoses and also an improved bend radius of over 70%. Complete overkill for this project, but the crimped on fittings look so much neater.

I asked the guys at RacingLines if they could send out all of the fittings and hose, so that I could mock up the lines on the car. They were happy to do this and all it meant was that, when I had all the hoses mocked up, I just posted them back to them to have the connectors crimped in place. I was impressed that included in the price of the SUPALITE fittings is the final crimping and pressure testing. The only extra it cost me was the cost of the postage each way. Again I have to mention that the customer service from the guys at RacingLines was superb. After posting back my mocked up lines they had them back to me, all crimped and pressure tested, within a couple of days.

Here are a few pics of the installed hoses.

The Devil is in the detail

Another small (tiny) modification I made for the engine bay was to convert the existing cam cover breather to accept an AN style connector, rather than just a push on hose. I basically just turned down a -8 AN fitting and had the guys weld it to the existing outlet. Then I just flushed off the weld so that it looks OE and gave it a coat of crinkle grey to match the cam cover. As I said, a small mod but i think it looks much neater.

I decided I would make a complete cold air intake and air box. As I just can’t live with the thought of open trumpets. As great as they sound it is just too risky leaving an engine exposed like that. The other option is just some sort of filter or sock filters, although they are usually too ugly to live with. An air box with a proper ducted air supply will nearly always increase an engines performance.

Some basic cardboard templates are usually the best place to start. Perfect for getting some rough parameters when space is tight.

The next step was to plot out the bolt pattern for the trumpets. The finished air box will be mounted by sandwiching it between the throttle bodies and the trumpets. This section of the pattern will form the base plate that surrounds the trumpets.

Next off was to drill the base off so I could mount it to the throttle bodies.

I also added some dowels as locators between the base and top section. This will allow me to work it as a whole and then separate it for moulding.

Three 50mm sections of tooling board make up the air box pattern. Two are bonded together to form the top part, which is then doweled and screwed to the base section. Now I have the rough block I can begin working the shape I’m after. This isn’t necessarily how you would make a pattern from a drawing. But in this instance it is easier to shape it to suit the space available. So I have blocked it up to suit that process.

The next series of images are just some shots of the various stages of rough shaping. There is usually a trade off with most air boxes. It ultimately comes down to packaging it and maintaining a decent flow in, whilst avoiding all of the other stuff in the engine bay. The biggest snag for me in this build is avoiding the oil tank for the dry sump system.

Now that I have the rough shape made, the next step will be final surfacing and moulding…

You may of noticed, in some of the images, I have made a start on sorting out the engine loom. There are still a few things to be finalised, so I haven’t gone too far yet. I will go into it in a bit more detail when I am ready for the final wiring installation.